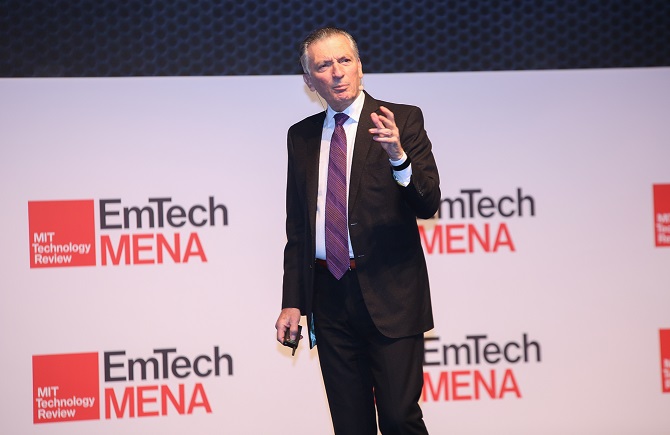 With a rising population around the world leading to increasing energy demands, experts gave an outlook of energy and its transformation in the near future.

Speaking at the first day of EmTech MENA in Dubai on Sunday, they discussed innovative and creative ways to generate, store and use energy to help solve the critical challenge facing future societies.

“Technology is predicated on the availability of electricity,” said Donald Sadoway, John F. Elliott Professor of Materials Chemistry at the Massachusetts Institute of Technology in the United States. “Where you see light, you see the modern world. Ideally, it should be sustainable electricity for sustainable modernity.”

The United Nations focuses on 17 Sustainable Development Goals, of which one tackles affordable and clean energy. A sub-group includes access to electricity for all on the planet. Prof. Sadoway believes storage is the key enabler. “It will allow us to address the intermittency of renewables, such as wind and solar,” he said. “With storage, we could draw electricity from the sun even when it doesn’t shine, which will allow us to integrate fully into the base load. Supply must be in perfect balance with demand at all times – if we have free electricity from the sun in excess of demand, it does us no good, voltage will rise, will migrate, and this will do us harm.”

He stressed the need for storage which would, in today’s grid, make it a lot more efficient. But the journey from the lab bench to the marketplace is long. “A battery for the grid will have to last decades, not months, and it also has to be safe,” Prof. Sadoway added. “It has to be operationally flexible and low-cost.”

The path forward for storage would involve confining chemistry to earth-abundant elements. “If you want to make something dirt cheap, you make it out of dirt, preferably local, and make it easy to manufacture,” he said. “Lithium battery is very complex, and you have to think of design at the discovery stage. It’s so hard to innovate in this sector but we’re looking at research at MIT, with lower temperature, higher voltage and lower cost.”

Answering questions in such a complicated space will depend on technical, social and policy factors, according to Fikile Brushett, Professor of Chemical Engineering at MIT. “Any robust solution will have to address all these factors,” he said. “Looking at the world energy demand in the future, much of the developments in the world have been driven by energy abundance and density of fossil fuel. With progress, this comes with a challenge, and that is that we need to reduce carbon emissions.”

With growing importance on climate change, an urgent need for reducing emissions without stifling economic growth and keeping air quality in check due to increasing , the scope and scale of these challenges are large. “It’s about the way we deal with electricity generation, transportation and industry,” Prof. Brushett said. “We are making progress – over the past 10 years, we’ve seen dramatic drops in the cost of solar and wind PV.”

He said the role of renewable is increasing rapidly and deployment will be a big factor in our future society. But the challenge in this resource remains intermittency. “There are regions where, even if we have solar and wind capacity, it’s mismatched with where our load is,” he said. “And other regions don’t have enough of it around. Generation and demand are tied closely together so how do we decouple this?”

Attempting to unlock the full potential of renewables, by taking intermittent electrons into a blackbox process to convert them into reliable electricity, is one option. “Electrochemical technologies hold promise,” he added. “This technology underlies portable devices, fuel cells and some processes such as smelting and industrial-scale processes.”

Improvement in cost, durability and deployment at such scale will be needed. “Sadly, batteries are only about one per cent or less of the grid energy storage, it’s largely pumped hydro,” Prof. Brushett said. “We can learn some things about why it was successful: you have relatively cheap workings fluids and you have a turbine, which is how electricity is generated. But as the energy storage time gets longer, the turbine is significantly smaller than the energy storage so you’re able to decouple power and energy and the cost comes down.”

Nuclear energy was also mentioned, as it generates an intense amount of energy. The low-carbon energy is also not limited by nature, unlike solar and wind, and does not cause any pollution. “We have been burning coal biomass for many years for heating,” said Dr. Lin-wen Hu, Director of Research and Services at the MIT Nuclear Reactor Laboratory. “Nuclear power has been with us for the past couple of decades. It has proven to be reliable for several decades and continues to serve the expansion of electricity demand worldwide.”

Currently, more than 90 per cent of nuclear power produced worldwide is generated by Light Water Reactors (LWR). “This technology started in the military application before expanding worldwide,” she said. “Moving forward, if we are going to revolutionise nuclear power development, we need to ask whether we can move away from such reactors. The technology is limited because it requires a pressurised system.”

She said advanced nuclear reactors had many benefits, including operating at a much higher temperature, producing more electricity, and being used as direct heating for mining sites. “It opens opportunities for various industry applications,” Hu added. “Another reactor concept being looked at in the US is small modular reactors as they fill market gaps.” Emerging technologies she touched on include small sensors, digital control wireless, as it improves security and monitoring of a small reactor system, as well as machine learning which can predict a reactor’s .